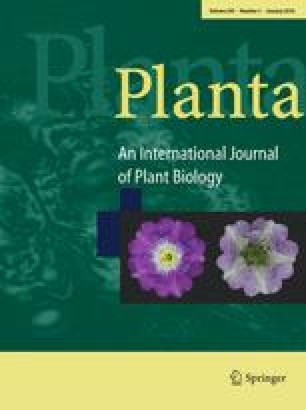 Root CO2 and O2 gas exchange were measured in young Carex extensa Good. (flooding sensitive), C. remota L. and C. pseudocyperus L. (both flooding tolerant) plants, precultured either aerobically or anaerobically. Temperature changes form 21 to 11 °C had small effects on root CO2 release from respiration. In C. extensa, root respiration rates decreased when plants were precultured anaerobically, while in C. pseudocyperus preculture conditions had no effect on root CO2 release. In contrast to CO2, temperature decrease significantly enhanced radial oxygen loss from the roots during the light phase, indicating that at 20 °C the O2 transported form the shoot to the root met the demand for root respiration quite well, while at 11 °C excess O2 entered the root and was released into the anaerobic nutrient solution. In C. remota and C. pseudocyperus, the maximal O2 concentration of a previously anaerobic nutrient solution was attained after several days of equilibration with the atmosphere through the plant body and was approximately one-third of that found in C. extensa, indicating that the diffusion resistance of the root/rhizosphere interface to O2 is much lower in the C. extensa root than in the flooding-tolerant Carex species. A calculation of the maximal attainable root length that can be sustained by pure O2 diffusion from CO2 exchange, and anatomical data obtained earlier, revealed that longitudinal diffusion of O2 through the root is sufficient for the oxygen supply of the root. It is concluded that the postulate of a gas mass-flow into the root is not necessary for the understanding of flooding tolerance of Carex species.