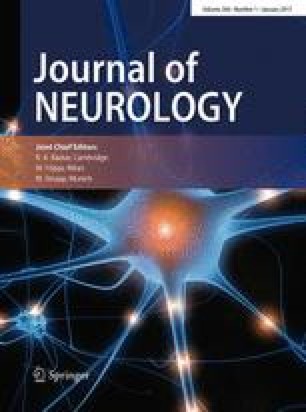 Paroxysmal exercise-induced dyskinesias (PED) are paroxysmal dyskinesias which manifest as dystonic movements brought on by sustained exercise. ECHS1 deficiency-induced EID was recently described by Olgiati et al. Our patient is an 8-year-old boy, who presented with intermittent episodes of stiffness and contractions affecting the legs which were always brought on by vigorous exertion. They began with curling of the toes and flexion, followed by stiffening of gait. These episodes were asymmetric, uncomfortable and often began in the left leg, often spreading to the right leg. They generally lasted for about 30–40 min. The phenomenology was noted to be dystonic affecting mostly the left leg, with equinus at the ankle and hyperextension at the knee. MRI of the brain showed regions of increased T2 and FLAIR signal and of T1 low signal in the globus pallidus bilaterally with mild diffusion restriction. Using Ambry’s ExomeNextTM, an integrated exome sequencing assay, the patient was found to be heterozygous for alterations in the ECHS1 gene: missense mutations in c.518C>T (p.A173V) and c.817A>G (p.K273E). After 3 months of treatment with a mitochondrial cocktail, the patient reported that his attacks were somewhat less frequent and less severe. We decided to continue the patient on the cocktail and prescribed clonazepam 0.5 mg 1 tab to be given, as needed, for acute dystonic episodes of severe degree. The missense mutation c.817A>G has never been associated with PED before. Further, we present the first case of ECH1-associated PED with initial symptomatic improvement with a mitochondrial cocktail.

Authors report no conflicts of interest.

This study has been performed in accordance with the ethical standards laid down in the 1964 Declaration of Helsinki and its later amendments.

All persons gave their informed consent prior to their inclusion in the study. Patient provided written consent for the video to be included in the paper. No patient identifiable information was included in the text.

Video 1 (Supplementary data) Legend: Dystonia affecting mostly the left leg, with equinus at the ankle and hyperextension at the knee (MP4 58006 kb)