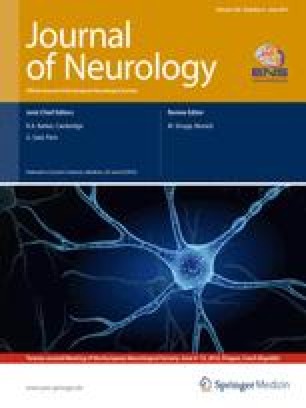 Letter to the Editors

The ‘applause sign’ refers to a tendency to initiate an automatic series of hand-claps despite instruction to clap three times only [1]. It is not specific for any one condition, but has been associated with progressive supranuclear palsy (PSP) in particular [2] and has also been described in corticobasal degeneration, multiple system atrophy and idiopathic Parkinson’s disease [3]. Localisation of the pathology that gives rise to the applause sign is uncertain. A combination of frontal cortical and basal ganglia dysfunction has been suggested. There has been one previous report of the applause sign in a patient without a known neurodegenerative disease. This occurred in a patient with diffuse B-cell lymphoma involving the putamen on one side; however, there was also extensive subcortical white matter disease bilaterally [4].

A 70-year-old man presented with sudden onset left hemiparesis. He was a diabetic with hypertension and hyperlipidemia. His family reported that he was...