Contributions to Mineralogy and Petrology 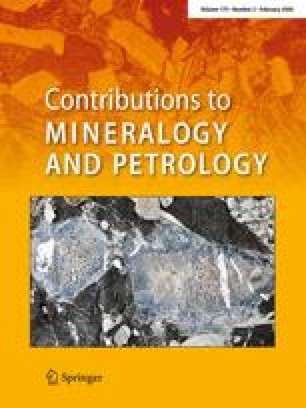 Contributions to Mineralogy and Petrology

Magmatic superheating is a condition with relevance to natural systems as well as experimental studies of crystallization kinetics. Magmas on Earth and other planetary bodies may become superheated during adiabatic ascent from the mantle or as a consequence of meteorite impact-generated crustal melting. Experimental studies of igneous processes commonly employ superheating in the homogenization of synthetic starting materials. We performed 1-atmosphere dynamic crystallization experiments to study the effects of superliquidus thermal history on the morphologies and compositions of subsequently grown olivine crystals. An ultramafic volcanic rock with abundant olivine was fused above the experimentally determined liquidus temperature (1395 °C), held for 0, 3, or 12 h, cooled at 25 °C h−1, and quenched from 200 °C below the liquidus, all at constant fO2, corresponding to FMQ-2 ± 0.2 log units. An increase in olivine morphologic instability is correlated with superheating magnitude, parameterized as the integrated time the sample is held above the liquidus (“TtL”;  °C h). We infer that a delay in nucleation, which intensifies monotonically with increasing TtL, causes crystal growth to be increasingly rapid. This result indicates that the structural relaxation time scale controlling the formation of crystal nuclei is (a) far longer than the time scale associated with viscous flow and (b) exceeds the liquidus dwell times typically imposed in crystallization experiments. The influence of magmatic superheating on crystal morphology is similar in sense and magnitude to that of subliquidus cooling rate and thus, both factors should be considered when interpreting the thermal history of a volcanic rock containing anhedral olivine.

We gratefully thank M. Garcia for discussions and samples, E. Hellebrand, T. Shea, J. Boesenberg, S. Mallick, B. Chilson Parks, A. Charn, and I. Fendley for analytical assistance; B. Welsch, G. Libourel, M. Rutherford, and M. Davis for lively debates; N. Arndt, B. Lange, S. Mollo and anonymous reviewers for thoughtful comments. This work was supported by National Science Foundation (US) awards EAR1321890 and EAR1347887 and is SOEST publication #10803.

Appendix A. Critically evaluating the effects of Na-loss

The conditions and consequences of the loss of volatile alkalis such as Na are exacerbated in our Na-rich starting material (~ 2 wt.% in the whole rock) by high operating temperatures (≤ 1500 °C). Noting the importance of Na2O concentration for olivine stability (e.g., Mathieu et al. 2011) and melt viscosity, we critically examine the effects of Na loss on our determination of the equilibrium olivine-in temperature and olivine growth rate.

Loss of Na serves to raise the liquidus of a silicate melt (Mathieu et al. 2011). Therefore, determining the liquidus of an alkalic melt undergoing volatile loss could be difficult. Notably, liquids having experienced severe Na-loss, with TL > 1395 °C, are thus likely to be less superheated than is implied by the reported + ∆T value. However, compositional analyses of the glass in five liquidus-seeking experiments (supplementary Excel file) show that variable Na loss does not significantly affect the olivine-in temperature of this composition at the conditions studied. For example, two experiments at 1396 °C were run for either 12 h (L11) or 6 h (L13), with the shorter duration quench product containing more than twice the Na2O content of the longer duration run. Crystals were only positively identified via SEM, and only in the 12 h sample. However, glass compositions show that the 6 h sample is slightly more evolved, suggesting our thin section of the 6 h sample simply did not intersect the minute amount of olivine present. Curiously, the lower Na content of the 12 h run should increase Tliquidus and result in more olivine crystallization at the given temperature, but this is not reflected in the liquid compositions. A similar comparison can be made between L06 and L12, run at 1380 °C for 12 h and 6 h, respectively. Again, despite more than 50% relative loss of Na2O in the 12 h run compared to the 6 h run, liquid compositions reveal similar ratios of Mg/Fe, Ca/Mg, and Al/Mg, suggesting no dramatic shift in liquidus temperature and thus corresponding olivine crystallization.

It is also clear from these glass analyses that the experiments at 1380 °C crystallized olivine, whereas the experiments at 1393–1396 °C have glass compositions almost identical to the high-T quench experiments (supplementary Excel file). Calculations using MELTS (Gualda et al. 2012) show an estimated liquidus temperature of 1373 °C, using the composition in Table 1. Thus, our glass data, similarity to MELTS calculations, and the observation that no relict olivine (identified visually or via glass composition) occurs in runs with TtL > 2, supports the determination of 1395 °C as the liquidus temperature of this material.

In addition to decreasing the actual superheating degree, Na-loss potentially influences crystal growth rate through an increase in the magnitude of undercooling imposed on the system at a given temperature during cooling, and secondly, through an increase in melt viscosity (Giordano et al. 2008). Increasing the undercooling increases the crystal growth rate, whereas increasing viscosity depresses the growth rate through a control on the mobility of crystal-forming components in the liquid. Could elevated growth rate in the high TtL samples result from Na-loss, rather than an influence of superheating on crystal nucleation? We quantitatively evaluate the competing effects of Na-loss for incipient olivine growth (i.e. the onset of crystallization) utilizing the classical formation of crystal growth rate with simplifying assumptions (Turnbull and Cohen 1960; Wagstaff 1968), adopted by Kirkpatrick (1975) and summarized in Eq. 2.
$$Y = \frac{fkT}{{3\eta \pi a_{0}^{2} }}\left[ {1 - \exp \left( {\frac{{ - \Delta H_{\text{fus}} \Delta T}}{{RTT_{\text{L}} }}} \right)} \right]$$
(2)
where Y is crystal face advance rate (m s−1); f is the fraction of sites available for atoms to attach to the crystal; k is the Boltzmann constant; T is temperature (K); η is the liquid viscosity (Pa s) calculated as a function of both composition and T according to Giordano et al. (2008); ao is the molecular layer thickness, here taken as the forsterite lattice parameter a, 4.75 × 10−10 m; TL is the olivine-in temperature (either 1395 or 1410 °C); ∆Hfus (J mol−1) is the heat of fusion of at TL, calculated for Fo86 at 1395 and 1410 °C using ∆Hfus values (Stebbins and Carmichael 1984; Richet et al. 1993) and heat capacity coefficients (Robie et al. 1978) for end-member forsterite and fayalite; in this context, ∆T is the undercooling (TL–T); and R is the gas constant. The absolute value of growth rate is poorly constrained through imprecise knowledge of f and ao. We address this problem by assuming f = 0.007, which reproduces the olivine growth rate observed in situ at ∆T = 75 °C (Jambon et al. 1992), adjusted for liquid viscosity. Importantly, the relative positions and magnitudes of growth rate maxima depend only on viscosity, ∆T, and TL, which we calculate for liquids using arbitrarily extreme values in Na2O content (4.7 and 0.2 wt.%) that go even beyond the loss in our experiments. We utilize MELTS (Gualda et al. 2012) for ∆T and TL calculations, and Giordano et al. (2008) for viscosity calculations.
As anticipated, increasing TL pushes the entire bell-shaped growth rate curve toward higher temperature, whereas increasing viscosity depresses the height of the curve. A crossover exists, such that olivine growth rate is more rapid in the Na-depleted liquid near TL, but at lower temperatures, growth is more rapid in the un-depleted melt (Fig. 6). The skeletal crystals observed in our experiments indicate growth at high undercooling, likely at temperatures below the crossover point (1370 °C). Making a comparison with the experiments of Faure et al. (2003), at our experimental cooling rate of 25 °C h−1, undercooling > 50 °C is necessary to produce the olivine morphologies in our experiments. Because Na-loss tends to reduce the growth rate at high undercooling, progressive Na-loss is unlikely to give rise to the morphologic progression with increasing TtL (Fig. 2). The inferred variations in growth rate more plausibly arise from differences in nucleation undercooling arising from superheating, as described above. We emphasize that this sensitivity analysis does not model olivine growth rate as it occurs in our experimental charges during cooling. The crystal growth rate varies with evolving viscosity and undercooling, with the former progressively increasing and the latter a complex function of decreasing temperature (raising the undercooling) and incremental crystallization (decreasing the undercooling).