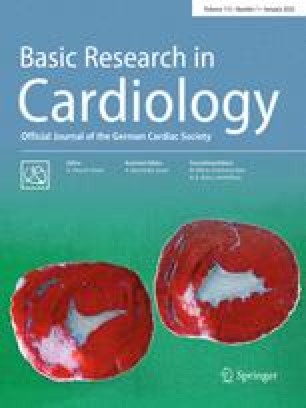 Implementation of modern reperfusion therapy for ST-elevation myocardial infarction (STEMI) has improved immediate outcome vastly [16, 19]. The improvement has come along with intensified preventive medication against recurrent cardiac events [19] and the reduction in infarct size obtained by rapid and efficient reperfusion that ensures preservation of left ventricular function [18]. The improved survival following optimal reperfusion therapy has changed the epidemiology of MI. An increasing number of patients may survive with residual symptoms predominantly manifesting as heart failure and ultimately mortality in a longer perspective than experienced before the reperfusion era. The recognition that the improvement in long-term outcome has not reached the same level as short-term advancement [2] suggests that additional reduction of infarct size beyond the improvement achieved by reperfusion therapy is needed to improve long-term outcome [8].

Infarct size reduction beyond rapid reperfusion has been addressed by attempts to diminish the ischemia–reperfusion injury that inevitably occurs by opening the coronary artery during primary percutaneous coronary intervention. Cardioprotective interventions to encounter this goal include pharmacological as well as mechanical approaches. Experimental and clinical proof-of-concept studies have documented that cyclosporine A, postconditioning, and remote ischemic conditioning substantially attenuate ischemia–reperfusion injury [2, 12, 14, 17]. However, translation of this diminution into a clinical benefit has been challenging [3, 6, 9]. Infarct size reduction has not consistently been reproduced in large clinical trials when biochemical biomarkers of myocardial injury are used for the assessment of infarct size rather than imaging modalities that allow quantification of infarct size and myocardial salvage [3, 5, 7, 9]. Even if infarct size actually is reduced by the cardioprotective interventions, the reduction may not translate into a clinical benefit because infarct size with contemporary reperfusion therapy is small, i.e. in the order of magnitude of 15–17% of the left ventricle, by reperfusion alone [2]. Infarct sizes within this scale infrequently manifest with clinical symptoms within the usual 6–12 months follow-up period presented in most clinical trials [15].

Recent data indicate that infarct size remains an important determinant of outcome, i.e. cardiac mortality and post-infarction heart failure, following acute myocardial infarction even in the reperfusion era [18]. However, the highly favorable development in the outcome for STEMI patients and the disappointing results of cardioprotective treatments in terms of clinical efficacy raise the question whether infarct size reduction alone significantly improves clinical outcome, when other essential variables, including cardiovascular risk factors, comorbidities, post-procedural variables, and concurrent treatments, are taken into account [11].

In the current issue of Basic Research in Cardiology, Bochaton et al. [1] present the results of an observational post hoc analysis of their original CIRCUS trial that demonstrated absent additive effect of the cardioprotective agent, cyclosporine A, on clinical outcome beyond rapid revascularization [3]. In the current analysis, the authors used the neutral clinical outcome data from the original trial to study the relative weight of a variety of potential predictors compared to infarct size. The relative weight of infarct size on clinical outcome, defined as all-cause mortality and hospitalization for heart failure at 1 year, was only 18% while 82% was accounted for by the other specified variables. Although the specific numbers are certainly not universal values, the overall trend is of clinical importance for identifying focus areas to further improve long-term outcome in patients with a revascularized STEMI.

Although peak creatine kinase assessment for infarct size quantification may not be as accurate as imaging modalities, it is of importance to note that the analysis by Bochaton et al. confirms that infarct size remains a determinant for clinical outcome for STEMI patients even in the reperfusion era. Thus, infarct size reduction should be a continued focus area. Achievement of this goal probably requires a more multitargeted approach than anticipated until now [4].

The acknowledged limitations of the current post hoc study are the relatively low sample size and the inherent retrospective and non-prespecified character of the analysis. Residual confounding by unmeasured variables may have influenced the results with regard to the identification of the most important determinants of clinical outcome. As such, the study should be considered mainly exploratory. However, the recognition that additional variables beyond infarct size determine outcome following revascularization in STEMI is important because some of these variables are modifiable. The fact that neither age nor total ischemia time, which are well-known determinants of clinical outcome in STEMI patients undergoing rapid revascularization, did not come out as predictors in the present analysis may merely reflect the inherent limitations of the post hoc conditions using available data from a randomized trial. More importantly, however, the analysis identified predictors that may be modifiable by appropriate intervention, including post-PCI TIMI flow grade, treatment with beta-blockers and angiotensin-converting enzyme inhibitors. Specifically, the study results suggest that microvascular obstruction [10] and beta-blocker treatment after acute myocardial infarction in revascularized patients without reduced left ventricular ejection fraction may be potential focus areas [13]. As the authors acknowledge, several targets may remain unidentified. Hence, the findings of the study stimulate a continued focus on reducing infarct size by a multitargeted approach and expanding the multitargeted approach to identify additional modifiable targets that can be addressed to further improve clinical outcome after revascularization of STEMI.