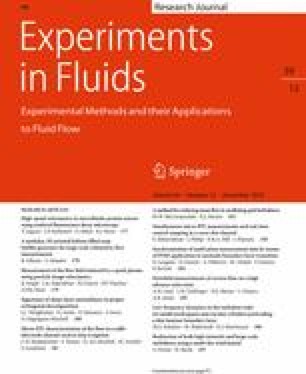 Here we report novel micro-PIV measurements around micron-sized objects that are trapped at the centre of a stagnation point flow generated in a cross-slow microchannel using real-time control. The method enables one to obtain accurate velocity and strain rate fields around the trapped objects under straining flows. In previous works, it has been assumed that the flow field measured in the absence of the object is the one experienced by the object in the stagnation point flow. However, the results reveal that this need not be the case and typically the strain rates experienced by the objects are higher. Therefore, simultaneously measuring the flow field around a trapped object is needed to accurately estimate the undisturbed strain rate (away from the trapped object). By combining the micro-PIV measurements with an analytical solution by Jeffery (Proc R Soc Lond A 102(715):161–179, 1922), we are able to estimate the velocity and strain rate around the trapped object, thus providing a potential fluidic method for characterising mechanical properties of micron-sized materials, which are important in biological and other applications.

A novel combination of classical micro-PIV and real-time flow control setups enabled us to measure the velocity field around a target trapped in the extensional flow, which opens up new vistas of characterisation of the mechanical properties of micron-sized objects.

The authors gratefully acknowledge the Australian Research Council for the financial support of this work. This work was performed in part at the Melbourne Centre for Nanofabrication (MCN) in the Victorian Node of the Australian National Fabrication Facility (ANFF).

Appendix A: Mechanism of the microfluidic hydrodynamic trap

In this work, repositioning the stagnation point (shown in Fig. 13b) is conducted by implementing a fixed width constriction in one of the outlets, and a variable height constriction on the other (Tanyeri et al. 2010). The former is shown in the bottom outlet and the latter is shown in red on the top outlet in Fig. 13a. Figure 13c shows the section A–A of the variable height constriction, known as an on-chip membrane valve (in Fig. 13a), and how its deformation constricts the height of the fluidic channel. The control channel is filled with pressurised gas, which results in the deflection of the thin membrane, thereby constricting the height of the fluidic channel. It is called the variable constriction because changes in the gas pressure leads to changes in the deflection of the membrane, and consequently constrict the channel at different heights.

A.2: Automation of the stagnation point repositioning to confine a target object at the channel centre

In the microfluidic hydrodynamic trap, when a target object enters the cross-slot region (shown in Fig. 14a), a camera captures and streams the image of the cross-junction to a computer. Using image-processing methods the shape of the object is determined and the position of the object centroid is computed. Based on the location of the object in extensional direction, the ratio of the outlet flow rates is changed and consequently the stagnation point is repositioned. The repositioning is carried out using the on-chip membrane valve, which allows the flow streamlines to be manipulated. This manipulation places the target object between the stagnation point and the centre of the channel (shown in Fig. 14b), thereby exerting a hydrodynamic force on the target object towards the trap centre. The manipulation results in placing the object on a new streamline and moving the object towards the channel centre. All of these steps are repeated until both the target and the stagnation point converge in the centre of the trap/channel (shown in Fig. 14c), and at this stage the pressure stays unchanged. However, if due to an external or internal disturbance the target object is displaced from the centre, the same procedure is re-applied forcing the object to return to the centre.

In this work, the foreground detection was carried out using the “Computer Vision System” toolbox in MATLAB. This includes acquiring the cross-region as the background and comparing it with the image of the target in the cross-region. Image comparison was followed by determining whether each pixel belongs to the background (channel) or the foreground (target). Before and after the foreground detection, image contrast enhancement and some morphological operations were carried out to improve in locating the accuracy the target’s centroid.

Figure 16 depicts the implementation of the image-processing steps used in the present work to locate the centroid of the A. circinalis filament. First, the background image of the region of interest (ROI) was acquired. This was conducted prior to the filament entering ROI (partially shown in Fig. 16a). Figure 16b shows a filament of the cyanobacteria in the ROI. Upon acquiring the image of the target (filament), the image contrast was enhanced to increase pixel intensity of the filament (shown in Fig. 16c). Afterwards, the foreground was detected. Foreground detection requires defining a threshold parameter that depends on the light condition to determine whether each pixel belongs to the channel or the target. The background was then subtracted from the foreground, thereby achieving the target object mask (the binary image shown in Fig. 16d). This step was followed by removing small objects and noises, by defining a certain threshold and removing the blobs (connected white regions) smaller than the threshold (shown in Fig. 16e). Due to the low resolution of camera and the shape of the objects, detecting the connections of the filaments is challenging. As can be seen, the connections are neither observable in Fig. 16b, nor detectable in Fig. 16e. To alleviate this issue, we used morphologically close operation by a \(7\times 7\)-pixel square-shaped structural element to increase the connectivity of the blobs without over-fattening it. Stated in Smith et al. (1997), morphologically close operation in processing of a binary image includes a morphologically erosive operation (making the blob smaller) followed by a morphologically dilative operation (making the blob larger). Figure 16f shows the post-processed mask of the filament after applying the morphologically close operation. Eventually, the centroid of the filament was determined using the blob analysis of the MATLAB computer vision system toolbox.

A.5: Calibrating the microfluidic trap

The calibration curve of the microfluidic trap is the variation of the stagnation point position at different control channel pressures. The linear region of this curve is used to determine the conversion factor (\(K_{\text {C}}\) in Eq. 1). To experimentally determine this curve, a fluid visualisation experiment was conducted, which delivered the fluid seeded with tracer particles to the cross-junction. By capturing the images of the cross-region, the flow is visualised. In this experiment, the flow was illuminated using the Nikon microscope Epi-fl illuminator (Mercury lamp). The epifluorescence imaging setup configuration that was used in micro-PIV experiments Akbaridoust et al. (2018), except the PIV camera that was replaced by the control camera was employed to acquire the images. The backgrounds (out-of-focus particles) of the acquired images were then removed Akbaridoust et al. (2018) and then 150 images were overlaid. This procedure was repeated at the different pressures in the control channel, and for each set of images the stagnation point was determined manually/visually with the accuracy of one pixel. One pixel corresponds to one micron for the control camera used in this experiment.

Figure 17 shows an example of 150 overlaid images at the flow rate of \(50~\upmu {\text {L/h}}\) and control channel pressure of about 8 psi. The distance of the stagnation point position from the centre line of the channel along the extensional and compressional axes are represented by \(Y_o\) and \(X_o\), respectively. As can be seen, the stagnation point is not located on the vertical centre line, due to the flow added to one of the inlets where the sample injection port is located. However, \(X_o\ne 0\) only occurs when the injection port is open. In trapping experiments once a target is trapped, the injection port is manually closed and the stagnation point gradually moves on the centre line along the compressional axis. Figure 18 shows the calibration curve that was experimentally determined (at \(50~\upmu {\text {L/h}}\)) at different pressures in the control channel. The slope of the fitted trend line represents the conversion factor (\(K_{\text {C}}\)).

Appendix B: Methodology of simultaneous micro-PIV measurements and trapping

In principle, the use of volume illumination in PIV measurements results in bright background in the images that drastically reduce the signal-to-noise ratio and the correlation peak detectability. Therefore, in micro-PIV, the epifluorescence imaging technique (i.e. illuminating the fluorescent particles by green pulsed light and capturing the red light from them) is implemented to alleviate this issue (Santiago et al. 1998). In hydrodynamic microfluidic trap experiments (in this work and also Schroeder and co-workers (Johnson-Chavarria et al. 2011, 2014; Latinwo et al. 2014; Li et al. 2015; Shenoy et al. 2015; Tanyeri and Schroeder; Tanyeri et al. 2010, 2011), a constant white light source (here ambient room lights) was used for imaging. Hence, simultaneous trapping of objects and micro-PIV measurements is challenging because both require their own illumination, optics and camera focused on the micron-sized objects. Simply combining the two experimental setups (micro-PIV and the microfluidic trap setups) to conduct simultaneous micro-PIV measurements and trapping in the microfluidic device leads to two major problems. The combination of the two setups is shown in Fig. 19. The first issue is the disruption of the control camera by the laser pulses. The second issue is the production of an extremely bright background in the images acquired by the PIV camera sensor due to the constant white light source. The former results in preventing the detection of a target object in the cross-slot channel. The top inset image in Fig. 19a shows an example of the image captured by the control camera when the laser was pulsing. As can be seen, the laser pulse interferes with the image-processing techniques for object detection. While, the latter is the production of extremely bright background that precludes correlating the recorded images. The bottom inset image in Fig. 19b shows an image of the particles captured by the PIV camera, while the constant white light was illuminating the flow.

To tackle the first issue we replaced the continuous white light with a continuous blue light source (i.e. filtering all the wavelengths except blue). Whilst, to address the second issue, we filtered all the wavelengths (except blue) incident on the control camera sensor. Using this arrangement, the control camera sensor does not capture the laser pulses, and the PIV camera does not acquire the bright background caused by the constant light source. Figure 4 shows the schematic of the combined micro-PIV and active control system setups, where the two problems that were pointed out are solved using two single-band (blue) bandpass filters. The bandpass filters block all the wavelengths out of the range 420–480 nm.