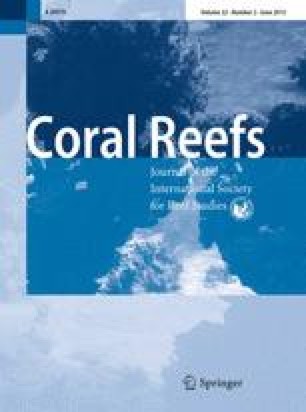 Structural Habitat Patch Reef Soft Coral Algal Ridge Caribbean Region
These keywords were added by machine and not by the authors. This process is experimental and the keywords may be updated as the learning algorithm improves.

The genus Ramicrusta has only been known in the western Atlantic since 2009 (as Ramicrusta textilis Peuschul & Saunders 2009). The species was since reported by Ballantine et al. (2011) from a shallow water site located adjacent to Isla Caja de Muertos, offshore from Ponce, Puerto Rico (Fig. 1). Ramicrusta is the principal calcareous benthic element in this patch reef environment. We speculate that the algal reef functions similarly to shallow scleractinian-dominated coral patch reefs, supporting similar fish and macro-invertebrate communities (Electronic Supplemental Material). Individual Ramicrusta mounds reach 3 m in diameter and to 1.0 m in height.
Ramicrusta may have become established at the site after overgrowing scleractinean and soft corals (Fig. 2). Individual stands of Ramicrusta textilis are probably not long-lived as they become hollowed out within (Fig. 3) and in this state are subject to being torn away from their substratum by wave and current energy. Nevertheless, the reef persists, presumably due to the rapid growth of the red alga. We have conservatively estimated an aerial cover of approximately 18,000 m2 for the formation. Other than the well-known role of coralline red algae which make up “algal ridges” (Adey 1978), red algae making up reef structural habitats is previously unknown in the Caribbean region.

This contribution was supported by the NOAA Caribbean Coral Reef Institute (CCRI), University of Puerto Rico.