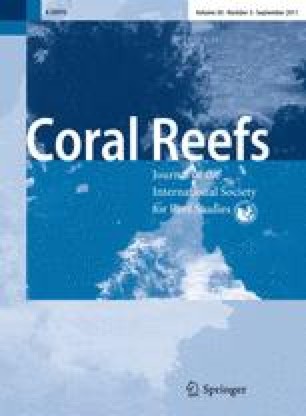 Epizoic acoelomorph flatworms compete with their coral host for zooplankton

Coral Species Lateral Edge Scleractinian Coral Competitive Pressure Potential Negative Effect
These keywords were added by machine and not by the authors. This process is experimental and the keywords may be updated as the learning algorithm improves.

It is well known that many scleractinian coral species host epizoic acoelomorph flatworms, both in captivity and in situ, with potential negative effects such as light-shading and reduced resistance against environmental impacts and pathogens (Naumann et al. 2010). Here, we show that epizoic acoelomorph flatworms (Waminoa sp.) compete with their coral host for zooplankton under laboratory conditions.

Single polyps (n = 5) of the scleractinian coral Galaxea fascicularis were incubated in a flow cell for 30 min together with Artemia nauplii (10,000 L−1), and their feeding activities were recorded.

On average, G. fascicularis polyps hosted 2 ± 1 SD flatworms which captured a total of 1.7 ± 0.5 SD Artemia nauplii per 30 min interval (0.9 ± 0.6 SD nauplii flatworm−1). Flatworms captured nauplii by raising their anterior edge from the polyp surface, curling their lateral edges downward and encapsulating prey (Fig. 1a–e, supplemental video). Subsequent paralysis of prey was observed, which was possibly followed by ingestion and digestion of prey. Similar predatory behavior has been documented for the flatworm Convolutrilobaretrogemma (Hendelberg and Åkesson 1988). Translocation of Artemia nauplii or partially digested remnants thereof from the flatworms to the coral host was not observed in this study, indicating that the flatworms compete for food with their coral host.

Although the competitive pressure exerted by flatworms may seem moderate when taking the host feeding rate in the laboratory (52.8 ± 41.9 nauplii polyp−1 30 min−1) into account, it could be significant at in situ plankton concentrations which are four orders of magnitude lower than those used here (Palardy et al. 2006). We conclude that the presence of epizoic acoelomorph flatworms may affect long-term coral growth and health. These results have implications for our understanding of coral host-symbiont interactions and benthic-pelagic coupling.

This work was funded by Wageningen University.