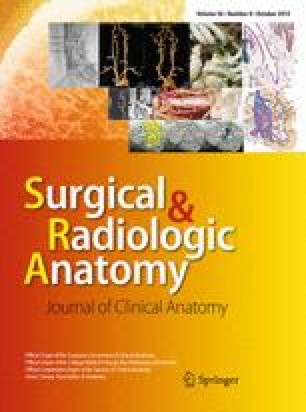 The purpose of this study was to clarify rotational relationships between the anatomical landmarks of the glenohumeral joint in maximum elevation.

Twenty-five healthy volunteers (20 men, 5 women; mean age, 31 years) held the arm in maximum elevation in an open MRI system. In each three-dimensionally computer-generated image, elevation angle of the humerus in the plane of elevation was measured, based on the glenoid and the scapular planes. Using the equator set on the head surface by the plane parallel to the humeral axis, involving the head center and the bicipital groove, glenoid location and rotational relationships were investigated.

The elevation angle was 102° ± 9° in the plane 7° ± 8° anterior to the scapular plane, and axial rotation was fixed with the glenoidal long axis parallel to the equator (within 2°). Each glenoid center located on antero-superior portion of the humeral head, and the direction from the top of the head to its location was the same as that of the shaft tilting, indicating the glenoid only translated without rotation after reaching the top of the head on the equator.

Arm elevation is one of the most important functions of the shoulder in our daily lives [4, 12, 13]. Many studies [1, 3, 5, 7, 9, 11, 14, 16, 17] approached the topics about arm elevation, one [11] of which indicated that the humerus moves toward a similar final position at the end of raising the arm irrespective of the plane of elevation, and its position is one of external rotation and elevation of the humerus relative to the scapula, slightly anterior to the plane of the scapula. However, they only measured rotational angles of the glenohumeral joint and could not clarify the relationships between the anatomical landmarks of its joint. When the arm reaches its position, most proximal part of the humerus is covered with the acromion, making it difficult to know the anatomical position of the joint. We investigated rotational relationships between the anatomical landmarks of the glenohumeral joint in maximum elevation.

Twenty-five volunteers (20 men, 5 women) without symptoms or history of shoulder disease were enrolled in the study. Mean age was 29 (21–35) years. All participants provided informed consent. The maximum elevation of the shoulder was defined as the position in which the tips of fingers could reach highest in a standing position. A surgical mattress (VACUFORM; Schmidt, Garbsen, Germany) made of micro-balls of styrofoam, which could be stabilized by vacuum, was adopted around his or her upper extremity and body to reproduce shoulder position (Fig. 1). The amount of pronation or supination of the forearm was not specified. Each participant maintained the same maximum elevation with that surgical mattress, lying supine in a 0.2-T MRI system (Magnetom Open, Siemens, Munich, Germany). The shoulders were imaged using a three-dimensional (3D) gradient echo (repetition time, 56 ms; echo time, 25 ms; flip angle, 40°) with 2-mm thickness. All images were obtained with an 18-cm FOV and a 256 × 192 matrix. Imaging process required an average of 10 min.

All data were transferred to a computer (O2; SGI, Mountain View, CA) and a 3D image of the glenohumeral joint including the proximal part of the humerus was generated using computer software (3D-Virtuoso, Siemens). Providing instant access to 3D information, the same software allowed anatomies to be viewed from any angle.

Two cross-sections of the humerus were obtained at 7.5 and 15 cm from the proximal end. The center for these cross-sections of the cortical bone was determined by fitting a circle, and the humeral axis was defined as the line that passed through the center of these circles. Using the data of Iannotti et al. [8], which showed correlations between size of the glenoid and the radius of curvature of the humeral head, each humeral radius was calculated as follows: radius (mm) = 24 × length of glenoidal long axis/39 (where 24 is the average head radius and 39 is the average glenoidal long axis in the population as measured by Iannotti et al.). The head was cut in a plane perpendicular to the humeral axis at the distance of the radius from the proximal end, and the center determined by fitting a circle of the same radius. This was regarded as the center of the head. In this plane, the bottom of the bicipital groove was also plotted.

Ten different glenoids were analyzed measuring length values of the long and the transverse axes by two independent investigators to determine the inter-observer variability. To measure the intra-observer variability, those values in 10 glenoids were measured twice by the same person. Angle values of the plane including the shaft axis and the head center to the equator on the head surface were also analyzed to determine these variabilities for the humerus. All data are expressed as mean ± SD. To assess these variabilities, the interclass and intraclass correlation coefficients were used (Wilcoxon Signed Ranks test).

Length values of the long and the transverse axes of the glenoid, and angle values of the plane including the shaft axis and the head center to the equator on the head surface were 36.0 ± 3.0 mm, 22.5 ± 2.1 mm, 10.0° ± 8.8°. Those values in ten glenoid and humeral bones showed the variability or the reproducibility was high with a correlation coefficient ranging from 0.73 to 0.98 (Wilcoxon Signed Ranks test) (Table 1).
Table 1

The humeral shaft showed 102° ± 9° of elevation in the plane which faces 7° ± 8° anterior to the scapular plane on the glenoid. Axial rotation was fixed with the glenoidal long axis parallel to the equator (within 2°).

The final position was proved to be the same in all subjects, suggesting this position is unique and may be reached whatever the course of the humerus.

The glenohumeral joint was considered to reach a general position at the end of raising the arm whatever the passway followed by the humerus [4, 6, 11, 13]. However, there has been no precise in vivo description of the glenohumeral joint in maximum elevation. Some discrepancies existed in the past studies about the position of the glenohumeral position in maximum elevation. Browne et al. [3] found that the plane of maximum elevation was 23° anterior to the scapular plane, while Pearl et al. [15] reported the same plane was 4° posterior to the scapular plane. One reason for explaining the discrepancies might be that those studies used different methods. The former was a cadaveric study and the latter study used the scapular locating device for estimating locations of the scapula in vivo. Cadaveric studies possess limitations in that the scapula is affixed to a support without outer muscles as well as the clavicle and ribs. On the other hand, locating devices have a problem in estimation of location of the bones. Three-dimensional computer-generated MRI without radiation exposure on subjects would be appropriate for analyzing a static position because relations between the bony landmarks can be investigated through trial and error on a computer screen.

For investigating rotational alignment of the joint, we set the equator and its parallel lines on the surface of the humeral head. The equator was determined to include the bicipital groove because several authors [4, 12, 13] suggested its importance to glenohumeral motion or position. In the result, all subjects showed that the glenoidal long axis became parallel to the equator in maximum elevation. As long as axial rotation in the glenohumeral joint is expressed as rotational angle of the humeral axis, those values possibly are varying. One reason for this variation might be that the head has offset and angle of retroversion depends on each subject as was suggested by angle of the plane in Table 1. To the best of our knowledge, this study was the first representing a concrete description about anatomical relationship of rotation in maximum elevation.

Ranges of rotation would be restricted with arm elevation because insertion of the short rotators approaches the glenoid surface and the capsule surrounding the head also becomes tight. Thus, irrespective of the plane of elevation, the shoulder joint would finally converge to the same, i.e., the preferential position. Gagey et al. [6] described behavior of coracohumeral and inferior glenohumeral ligaments that participate in determining the preferential position. In their experimental study, the axis of the humeral shaft in that position was shown to be perpendicular to the glenoid cavity and it also was shown there still existed lateral rotation of the humerus allowing continuation of elevation as a final phase.

Figure 5 illustrated the trajectory of the glenoid on the humeral head during arm elevation The glenoid moves upward on the surface of the humeral head, converging to the equator with ranges of rotation getting restricted. When the glenoidal long axis becomes parallel to the equator, the glenoid center is located on the top of the head, in which the joint is locked in axial rotation. That position would be essentially the final position of elevation. When the arm is more elevated after that position, the glenoid would only translate to the antero-superior portion of the humeral head without axial rotation (Fig. 5a, b). In fact, the direction of its translation was the same as that of the shaft tilting on the glenoid. Our data supported the studies by Browne et al. [4] showing the plane of maximum elevation was anterior to the plane of the scapula.

Certain shortcomings of this study must be acknowledged. A surgical mattress was adopted around elevated arm and body in a standing position and the angle of the upper extremity to the trunk was reproduced in an open MRI system. However, each participant had to lie in a supine position in the system and it was possible his or her position of the joint was changed. Systems with upright coils should be used for directly investigating the difference in relationship in standing or sitting positions and that would enable determining the effect of gravity on the glenohumeral relationship. We could not clarify which part of anatomy was essential for determining the positioning in maximum elevation in this study. Information about cases with rotator cuff tear or without the long head of the biceps might be helpful for clarifying which part of the joint is essential to determine the positioning. Experiments like ex vivo studies simulating rotator cuff tears [2, 18] might also be useful to know the mechanism around maximum elevation.

Even though those limitations should be taken into consideration, the current study might be sufficient to describe the static position of the glenohumeral joint in maximum elevation. The result of the study suggested (a) the position in which the glenoid is on the top of the humeral head with the humeral shaft perpendicular to the glenoid is essentially the final position of elevation, and (b) the humeral axis is slightly anterior to the plane of the scapula and no axial rotation is available for the humerus after that final position. Rehabilitation programs aiming at reaching this position when the joint is impaired after injury or operation would be reasonable from this biomechanical point of view.

Open AccessThis article is distributed under the terms of the Creative Commons Attribution License which permits any use, distribution, and reproduction in any medium, provided the original author(s) and the source are credited.