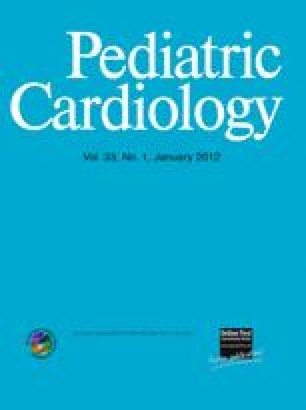 Chiari’s Network as a Cause of Fetal and Neonatal Pathology

Chiari’s network is a remnant of the eustachian valve located in the right atrium. Incomplete involution of the fetal sinus venosus valves results in “redundant” Chiari’s network, which may compromise cardiovascular function. This report describes a case with the novel finding of prenatal compromise due to redundant Chiari’s network and an uncommon case with significant postnatal symptoms. In both cases, the symptoms (fetal hydrops and postnatal cyanosis) resolved spontaneously. The variety of cardiovascular pathologies described in the literature is believed to be associated with persistence of a Chiari network. Knowledge about this not always harmless structure is important for perinatologists, pediatricians, and pediatric cardiologists alike. The clinical importance of this rare pathology is that prenatal counseling may anticipate a generally positive outcome and that surgical intervention generally should be avoided.

Chiari’s network is a rare condition first described by Hans Chiari [4] in 1897. In fetal life, the eustachian valve in the superior portion of the right sinus venosus directs blood from the inferior vena cava toward the foramen ovale. This valve regresses at 9–15 weeks of gestation. Incomplete regression results in a persistent or prominent eustachian valve. This usually is noted by the presence of a thin ridge or a crescentic fold of endocardium that arises from the anterior rim of the inferior vena cava orifice. The thebesian valve located in the coronary sinus also may be involved [11].

If the eustachian valve remnants comprise a membrane of fine fenestrated fibers located in the right atrium, it is called a Chiari network [3, 4, 6, 9, 11, 12]. In fetal and neonatal cardiology, a Chiari network is believed only rarely to have clinical consequences [11]. Nevertheless, a number of cases have been described with clinical pathology believed to be associated with the presence of a Chiari network [1, 2, 5, 7, 8, 10, 11]. Rarely, persistent rudimentary valves and consequent underdevelopment of the right-sided cardiac structures require surgical correction [11].

In this report, we describe two patients whose persistent Chiari network caused transient pathology in the fetal and neonatal phases, respectively.

At 12 weeks gestation, a fetus presented with increased nuchal translucency thickness, hydrops, and reversed flow in the ductus venosus, as assessed sonographically (Fig. 1a). Chorionic villus sampling demonstrated a normal male (46,XY) karyotype. Fetal echocardiography at 19 weeks gestation showed multiple hyperechogenic structures originating from the inferior vena cava and the posterior wall of the right atrium and prolapsing into the tricuspid valve orifice (Fig. 1b). No other causes of fetal hydrops could be detected. At 20 weeks gestation, the hydrops had resolved completely, and both the nuchal fold and the ductus venosus flow had normalized.

After spontaneous delivery at 40 weeks gestation, the neonate’s Apgar scores and perinatal oxygen saturation were normal. The birth weight was at the 50th percentile. Postnatal echocardiography on the first day of life showed multiple hyperechogenic structures prolapsing into the tricuspid orifice without creating significant obstruction. These findings confirmed the diagnosis of a Chiari network. The main pulmonary artery and pulmonary valve ring diameter (8.5 mm) was small, whereas the aortic valve ring diameter was normal (10 mm). Further echocardiographic evaluation at the age of 6 months demonstrated further regression of the Chiari network and normal development of the pulmonary valve ring diameter.

A term-born female neonate (39 + 5 weeks of gestation) presented directly after birth with abnormal heart sounds and cyanosis. Fetal ultrasound screening had not been performed. The pregnancy and birth were reported to be uneventful.

At the physical examination directly after birth, the neonate appeared cyanotic. Cardiac auscultation exhibited an additional heart sound but no murmur. The transcutaneously measured oxygen saturation (SaO2) of the blood was decreased (82–90%). Supplementation of oxygen resulted in an increase in the peripheral SaO2 to between 85 and 92%.

The importance of these case reports lies in the fact that we were able to identify, by ultrasound, membranous structures in the right atrium that caused significant clinical symptoms, both prenatally and postnatally. We describe two patients whose delayed involution of the fetal sinus venosus valves resulted in the formation of Chiari networks.

In the one patient, obstruction of the right atrial inflow caused severe hydrops in early pregnancy. The other patient showed cyanosis and decreased oxygen saturation shortly after birth due to right ventricular inflow obstruction and right-to-left shunting through the PFO. In both patients, tricuspid valve inflow obstruction caused by the Chiari network led to a reduced right ventricle stroke volume, resulting in a slight underdevelopment of the pulmonary artery, as evidenced by reduced pulmonary valve ring diameter. To our knowledge, this is the first description of a consistent association between incomplete regression of fetal sinus venosus valves and fetal hydrops,

In case 1, fetal echocardiography at 19 weeks gestation showed a membranous structure in the right atrium, identified as a Chiari network. Originating from the inferior vena cava and the posterior wall of the right atrium, it prolapsed into the tricuspid valve orifice (Fig. 1b). Apparently, this rudimentary structure had caused impaired inflow into the right atrium severe enough to cause reversed flow in the ductus venosus during the first trimester. Subsequent gradual regression of the Chiari network was observed, and the inflow obstruction resolved spontaneously. Because there was no other manifest explanation for the fetal hydrops, we postulate that the obstruction caused by the rudimentary structure probably had been even more significant in the early stages of fetal development, thereby causing the fetal hydrops observed at 12 weeks gestation.

In case 2, the Chiari network, causing tricuspid valve orifice obstruction and interatrial right-to-left shunting, produced postnatal clinical symptoms: cyanosis and a third heart sound. As in the first case, these symptoms gradually resolved spontaneously and became clinically insignificant. In both cases, all clinical symptoms resolved without therapeutic intervention other than a temporary supply of oxygen in the second case.

Several case reports describe pathology believed to be associated with a Chiari network. Akcaboy et al. [1] describe a boy who was cyanotic at birth and needed oxygen supplementation for 20 days. Lanzarini et al. [8] and Gussenhoven et al. [7] describe two children with a Chiari network whose persistent obstruction and cyanosis caused by this abnormal structure required surgical removal of the Chiari network. In some case reports, an additional or split heart sound is described, as with our second patient [5, 7].

In a series of 14 cases, Trento et al. [11] describe eight patients with Chiari networks causing significant pathology. Surgical removal was performed for two of the patients because of persistent obstruction causing underdevelopment of the right-sided cardiac structures. This underscores the significance finding underdevelopment of the pulmonary artery in our two patients, as evidenced by the reduced pulmonary valve ring diameter at birth.

We hypothesize that the observed obstruction of the tricuspid valve orifice is the turning point in the reported abnormality. Thus, even if definitive evidence for the cause of the fetal hydrops in our first patient is lacking, it is at least very likely that the obstruction of the tricuspid valve by fetal valve remnants in this patient caused reversed flow in the ductus venosus during the first trimester.

The requirement for surgical correction depends on the course and nature of the abnormality. Our patients showed a self-limited course, in which refraining from any surgical intervention seemed mandatory. In contrast, for some of their patients, Trento et al. [11] describe a “windsock,” which is unlikely to regress spontaneously and therefore requires surgical removal.

In conclusion, a Chiari network, although generally considered clinically insignificant, may have severe adverse fetal and neonatal consequences. The possibility of a Chiari network must be taken into consideration for patients presenting with fetal hydrops or unexplained postnatal oxygen desaturation accompanied by an additional early systolic heart sound. Clinicians should be aware of the ability that a redundant Chiari network has to regress spontaneously. Prenatally, this is important for correct appreciation and counseling. Surgical intervention should be balanced carefully in infancy because the clinical consequences of a Chiari network may resolve spontaneously, and catch-up growth of the pulmonary artery can be expected. Therefore, knowledge about this not always harmless structure is important for perinatologists, neonatologists, general pediatricians, and pediatric cardiologists alike.

Movie Clip 2 Patient 2. Chiari network prolapsing from the right atrium via the tricuspid valve into the right ventricle. (MOV 1194 kb)