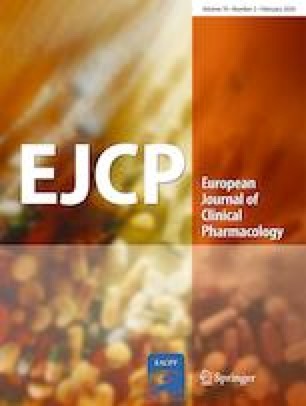 Register-based data was utilized to identify persons who received inpatient care due to schizophrenia during 1996–2014 in Finland and who did not use AD or MS at the time of first inpatient care diagnosis of schizophrenia (N = 7667, mean age 40.2, SD 18.2). Drug purchase data (1995–2017) was obtained from the National Prescription register and modelled with PRE2DUP method. Initiations of AD and MS use were followed up 3 years from first schizophrenia diagnoses. Cox proportional hazard models were used to investigate factors associated with AD or MS initiation.

The source population included all persons who received inpatient care due to schizophrenia from 1972 to 2014 in Finland (ICD-10 diagnoses F20 and F25, ICD-9 and ICD-8 diagnoses 295). This information was obtained from the Hospital Discharge register maintained by National Institute of Health and Welfare. For this study, 8342 persons with a first inpatient diagnoses of schizophrenia, without antipsychotic use during preceding year (short as first-episode schizophrenia) during 1996–2014 were included (mean age 40.6, SD 18.3, 56.3% males), and they formed the study population. More information on this cohort was added from several registers: drug purchase data (1995–2017) was obtained from the National Prescription register maintained by the Social Insurance Institution, all hospital care periods from Hospital Discharge register (1972–2017) and causes of death (1972–2017) from the National Death register.

The register-based drug purchase data does not provide information on the duration of drug use. To investigate the duration, we used the PRE2DUP method, developed by our research group [16]. PRE2DUP estimates drug use periods based on the sliding average of daily doses, purchased amount, and parameters assigned for drug packages which control the joining of purchases. In addition to these, PRE2DUP considers changes of doses, possible inpatient care (wherein drug use is not recorded on the registers) and stockpiling of drugs. PRE2DUP and the validity of this method are described in detail in previous studies [16, 17, 18].

The inclusion criteria for this study were that the person was diagnosed with schizophrenia in 1996 or after and did not use antipsychotics within a year before the first diagnosis. Prevalence of AD and MS use was assessed within this group (N = 8342). For identification of new antidepressant and mood stabilizer users, persons who had ongoing AD and/or MS use at the index date (discharge from the first schizophrenia-related hospitalization) were excluded (N = 675) (Supplementary Fig. 1). The final cohort consisted of 7667 persons, who were followed up for AD and MS initiation for 3 years after the index date.

The main outcome was initiation of AD or MS use. We also described initiations of AD and MS subgroups by ATC classification and/or by mechanism of action.

Factors associated with the initiation of AD or MS were separately investigated for these two groups. These factors included age, gender, previous suicidal behaviour, substance abuse and the number of previous hospitalizations due to psychoses. In addition, comorbid conditions including cardiovascular diseases (CV-diseases), cancer, diabetes, asthma, post-traumatic stress disorder (PTSD) and lipidemias were assessed. We also assessed use of analgesics, anticholinergic anti-Parkinson drugs (for extrapyramidal symptoms of antipsychotics), benzodiazepines and benzodiazepine-related drugs (z-drugs). Detailed definitions of comorbidities are presented in Supplementary Table 1.

Prevalence of AD and MS use, alone or in combination, was assessed as point prevalence every 6 months, from 3 years before and until 3 years after the index date. For initiations of AD and MS use after the index date, the follow-up ended 3 years after index date, death, or 31st of December 2017, whichever occurred first. Kaplan-Meier analyses were performed to investigate time to the initiation of adjunctive pharmacotherapy. The association between covariates and AD or MS initiation was investigated with Cox proportional hazard models. Associations were reported as unadjusted and adjusted Hazard Ratios (HRs) with 95% confidence intervals (CIs). Data analyses were performed with SAS for Windows, version 9.4 (SAS Institute Inc., Cary, NC, USA).

Ethics of the study

The data for this study was collected and combined from registers utilizing personal identification numbers, and no contact was made with the participants of the study. Permissions were granted by pertinent institutional authorities at the Finnish National Institute for Health and Welfare (permission THL/1466/6.02.00/2013), The Social Insurance Institution of Finland (34/522/2013), and Statistics Finland (TK53–305-13). Before submission to the researchers, the data was de-identified, and no informed consent from the participants was required according the Finnish legislation.

The mean age of the study population was 40.2 years (SD 18.2) at the first hospitalization, and 56.8% were males. Within 3 years of follow-up, 18.3% had one psychiatric readmission and 28.9% had more than one, whereas 52.9% was not readmitted. Prevalence of AD (6.4–8.4%), MS (1.3–1.7%) and their concomitant use (0.6–0.7%) remained on a constant level from 3 years before until the first schizophrenia diagnoses (Fig. 1). After diagnoses, prevalence of AD and MS use increased and stabilized at a higher level within 1–1.5 years. Three years after the diagnoses, 19.1% used AD, 6.8% MS and 2.7% used both.
Within 3 years of follow-up, 2713 persons (35.4%) initiated AD use and 1084 persons (14.1%) initiated MS use (Fig. 2). The most frequently initiated subgroup of antidepressants was SSRIs (26.3%), and valproic acid was the most often initiated mood stabilizer (8.5%). The mean time to AD initiation was 2.15 years (95% CI 2.13–2.18) and 2.66 years (95% CI 2.64–2.68) to MS initiation (Supplementary Fig. 2).
Both antidepressant and mood stabilizer initiators were younger than those who did not initiate these drugs (Table 1). Males initiated MS use more often than females (53.8% of initiations, p = 0.0289). Among AD initiators, benzodiazepine and z-drug use was more common than among non-initiators, whereas MS initiators used more frequently antidepressants, and benzodiazepines than non-initiators. Suicidal behaviour was more common in both AD and MS initiators, and substance abuse was more common among MS initiators than non-initiators. Considering comorbidities, CV-diseases were more common in those who did not initiate MS or AD use compared to initiators. We also examined ten most commonly used antipsychotics. Among both AD and MS initiators, the most used antipsychotic was olanzapine, followed by risperidone and clozapine except for MS initiators, where clozapine was more commonly used than risperidone.
Table 1

Characteristics of antidepressant and mood stabilizer initiators and non-initiators

Our study showed that slightly more than one third of persons with first-episode schizophrenia initiated adjunct AD and approximately 15% initiated MS medication within 3 years of follow-up. Factors associated with both AD and MS initiation were younger age, female gender and use of benzodiazepines. The number of previous hospital-treated psychosis was associated with decreased risk of AD and increased risk of MS initiation.

According to the best of our knowledge, no previous study has assessed AD and MS initiations among persons with first-episode schizophrenia. However, prevalence of AD and MS use reported in previous studies has been somewhat similar [10, 11]. Olfson and colleagues reported slightly higher AD use and considerably higher MS use [13]. On the other hand, a study considering different continents reported clearly lower prevalence of AD use throughout the study but showed large regional differences in AD and MS use [14].

We also found that higher number of previous psychoses was associated with MS initiation, but an inverse association was found for AD initiation. This may be explained by use of MS (such as lithium) to control aggressive behaviour [24] and florid positive symptoms seen especially in schizoaffective disorder, resulting into recurrent hospitalizations. Patients with depressive and negative symptoms may be less frequently hospitalized, and they may receive more often antidepressive add-on treatment.

Persons initiating antipsychotic medication were aged roughly 39 years. This mean age is relatively high but in line with a previous study on first-episode schizophrenia cohort in Sweden [25]. According to a previous study, Finnish inpatient care diagnoses of schizophrenia have high validity (no false positive cases), but the register data may lack some persons fulfilling the diagnostic criteria for schizophrenia [26]. This likely reflects diagnostic delay in setting the final diagnoses, which is also supported by the fact that a large proportion of persons had used antipsychotics before their first diagnoses [27].

Our study has certain strengths and limitations. Finnish nationwide registers provide reliable information on schizophrenia, and comprehensive data of dispensed medications. Register-based studies usually have also limitations. The utilized registers, for example, do not offer data of indications of use or severity of symptoms. In addition, medication use during inpatient care is not recorded in the registers, and thus we lacked this information. The utilized registers include only persons diagnosed in inpatient care with schizophrenia and lack data on schizophrenia patients diagnosed only in outpatient care. However, persons with schizophrenia tend to be admitted into inpatient care at re-emergence of psychosis, and for this reason, this has only limited impact on the generalizability of our study. We lacked data on primary non-adherence, i.e., prescribed drugs that are never dispensed, and doses.

In conclusion, persons with first-episode schizophrenia relatively often use adjunctive AD and/or MS medication. As there is limited evidence of their effectiveness, more studies are needed to investigate the benefits and risks of these adjunctive medications.

This study was funded by the Finnish Ministry of Social Affairs and Health through the developmental fund for Niuvanniemi Hospital. HT and AP were funded by Academy of Finland (grants 315969, 320107). The funders of the study had no role in study design, data collection, data analysis, data interpretation, review or approval of the manuscript, or in the decision to submit the manuscript for publication.

Jari Tiihonen, Heidi Taipale and Antti Tanskanen have participated in research projects funded by grants from Janssen-Cilag and Eli Lilly to their employing institution. Jari Tiihonen reports personal fees from the Finnish Medicines Agency (Fimea), European Medicines Agency (EMA), Eli Lilly, Janssen-Cilag, Lundbeck, and Otsuka; is a member of advisory board for Lundbeck, and has received grants from the Stanley Foundation and Sigrid Jusélius Foundation. The other authors report no conflict of interest.