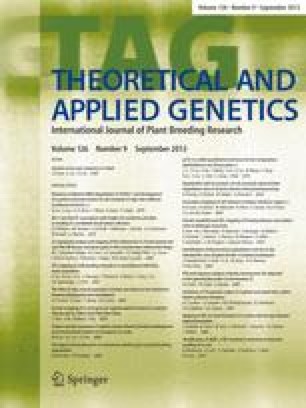 Genetic mapping of QTL controlling tissue-culture response on chromosome 2B of wheat (Triticum aestivum L.) in relation to major genes and RFLP markers

Three quantitative trait loci (QTL) for tissue- culture response (Tcr) were mapped on chromosome 2B of hexaploid wheat (Triticum aestivum L.) using single-chromosome recombinant lines. Tcr-B1 and Tcr-B2, affecting both green spots initiation and shoot regeneration, were mapped in relation to RFLP markers in the centromere region and on the short arm of chromosome 2B, linked to the photoperiod-response gene Ppd2. A third QTL (Tcr-B3), influencing regeneration only, was closely related to the disease resistance locus Yr7/Sr9g on the long arm of chromosome 2B. The homoeologous relationships to the tissue-culture response loci Qsr, Qcg and Shd of barley are discussed. A possible influence of the earliness per se genes of wheat and barley is suggested.