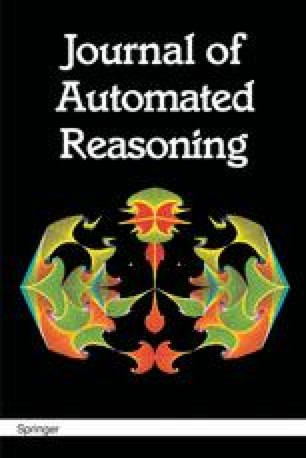 Searching for circles of pure proofs

When given a set of properties or conditions (say, three) that are claimed to be equivalent, the claim can be verified by supplying what we call acircle of proofs. In the case in point, one proves the second property or condition from the first, the third from the second, and the first from the third. If the proof that 1 implies 2 does not rely on 3, then we say that the proof is pure with respect to 3, or simply say theproof is pure. If one can renumber the three properties or conditions in such a way that one can find a circle of three pure proofs — technically, each proof pure with respect to the condition that is neither the hypothesis nor the conclusion — then we say that acircle of pure proofs has been found. Here we study the specific question of the existence of a circle of pure proofs for the thirteen shortest single axioms for equivalential calculus, subject to the requirement that condensed detachment be used as the rule of inference. For an indication of the difficulty of answering the question, we note that a single application of condensed detachment to the (shortest single) axiom known asP4 (also known asUM) with itself yields the (shortest single) axiomP5 (also known asXGF), and two applications of condensed detachment beginning withP5 as hypothesis yieldsP4. Therefore, except forP5, one cannot find a pure proof of any of the twelve shortest single axioms when usingP4 as hypothesis or axiom, for the first application of condensed detachment must focus on two copies ofP4, which results in the deduction ofP5, forcingP5 to be present in all proofs that useP4 as the only axiom. Further, the close proximity in the proof sense ofP4 when using as the only axiomP5 threatens to make impossible the discovery of a circle of pure proofs for the entire set of thirteen shortest single axioms. Perhaps more important than our study of pure proofs, and of a more general nature, we also present the methodology used to answer the cited specific question, a methodology that relies on various strategies and features offered by W. McCune's automated reasoning programOtter. The strategies and features ofOtter we discuss here offer researchers the needed power to answer deep questions and solve difficult problems. We close this article (in the last two sections) with some challenges and some topics for research and (in the Appendix) with a sample input file and some proofs for study.

Author supported by the Mathematical, Information, and Computational Sciences Division, Subprogram of the Office of Computational and Technology Research, U.S. Department of Energy, under Contract W-31-109-Eng-38.