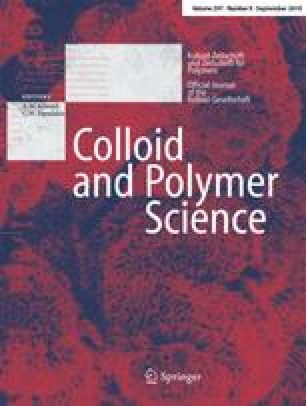 Adsorption behaviors of emulsifiers and biomolecules on temperaturesensitive polymer particles

Adsorption and desorption behaviours of emulsifiers and biomolecules on the two kinds of temperature-sensitive composite polymer particles were compared. One (I) was produced by seeded emulsion copolymerization of dimethylaminoethyl methacrylate and ethylene glycol dimethacrylate with 0.17 μm-sized polystyrene seed particles. The other (II) was produced by seeded emulsion copolymerization of N-isopropylacrylamide (NIPAM) and N,N′-methylenebisacrylamide with 0.36 μm-sized styrene-NIPAM copolymer particles. The amount of adsorption at temperatures above each lower critical solution temperature (LCST) was found to be much higher for I than II. In both cases, at temperatures below the LCST, almost all lactalbumin hydrolysate molecules adsorbed above the LCST were desorbed but the desorptions of adsorbed egg albumin and lysozyme molecules were not so high. The adsorption and desorption were reversible for both particles and the efficiency was better for I than II. From these results, it is concluded that the adsorption/desorption of protein onto the temperature-sensitive polymer particles is controllable by changing the temperature below and above the LCST of the shell layer and the sensitivity is based on the surface property of the composite polymer particles.

Part CXLIX of the series “Studies on Suspensions and Emulsions”